Most of my pension money is managed by Allan Gray. That’s a conscious choice, not something I inherited from a particular employer. And when I get one one of the quarterly email newsletters from the folks at Allan Gray even if I only glance at it, I feel comforted. Why? Have a look at the screenshot below. 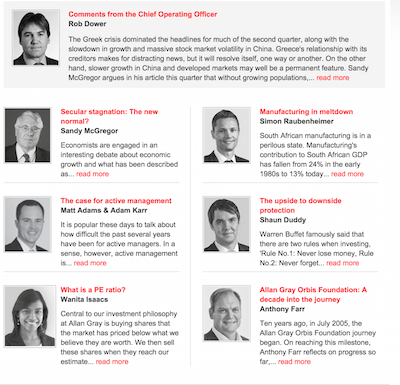 Look at those haircuts! Nerds for days!

Ok, Wanita is the exception, but the rest of these okes - dork central. Dudes with haircuts that terrible are not out to impress anyone. If the person managing my pension has a faux-hawk or more gel in his hair than sense in his head, I’m going to be nervous. I want someone focussed on managing my money, not impressing the other buggers at the Baron.

I’m only half joking here. So much of the world’s money is managed by relentless egotists who play poker with other people’s savings. So many of these so called money managers chase quarterly returns and put their bonus before all else. The guys at Allan Gray can be a bit stodgy, but they always deliver in the long run.

My investment style is deeply, deeply uncool. Buy early, hold long. No fads, no gold, no junk bonds, no private equity leveraged buy outs or collateralised debt obligations. No derivatives at all in fact.

And that’s why this kind of analysis from Sandy McGregor (the dude is called SANDY for shit’s sake!) is such a turn on for me:

It is no coincidence that high interest rates in the 1980s generated growth by eliminating an inefficient allocation of resources, whereas the experiment of zero rates has promoted inefficiency and has failed to generate robust growth. Since 2012 Japan has embarked on the most aggressive campaign of monetary easing ever attempted - with remarkably little effect on its real economy.