Given that I’m on Twitter hiatus and need to write more to keep myself sane, I’m going to be running these shortish posts every week (eek, no pressure) - one about Reactionary memes and the other about Progressive windmill tilting.

The Reactionary paranoia of the moment is that paedophilia is on course to be normalised - to become an accepted sexual orientation. This is alongside all the other “Woke perversions” like transgender teenagers who are, apparently, all the result of Munchausen syndrome by proxy (I’ll do another post on that topic at some point).

The argument goes as follows: evil gay, trans and genderqueer educators are indoctrinating young children into their sick worldview and “grooming” them to “turn into” transgender teenagers. The use of the word “grooming” is not accidental - the people selling these lies want you to draw a straight line between activist teachers and paedophilia.

If you think I’m exaggerating, I present the following meme (quite a tame example): 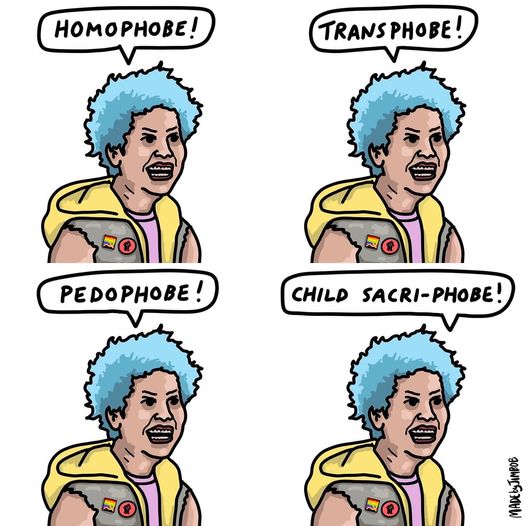 The Reactionary meme machine is now so finely tuned and powerful that I’ve encountered people who are usually sane and thoughtful saying things like “paedophilia will be legal in 5 years”. When I question them on the origin of these assertions, they draw a blank. They have been assured that paedophiles are working to make this a reality (and are likely to succeed) - and they trust the sources that have assured them of this far more than they trust the likes of me.

This is textbook Reactionary nonsense - paranoid, lacking in objective facts and cynically cloaked in the virtues of family values and “protecting the children”. It’s a classic existential-threat-to-our-way-of-life boogeyman, born of deep resentment and mistrust of “liberal elites” (more on that tomorrow). And, of course, it’s straight out of the playbook they used against “the gays” in the 1980s and 1990s.

It’s also an offshoot of one of the darkest and most deranged foci of the movement - Qanon. The followers of this online cult believe that the world is run by a baby-eating, paedophilic elite who are responsible for everything from the Kennedy assassination to the “rigged election” of Joe Biden. The ordinary people suddenly genuinely worried that paedophilia will become mainstream are largely unaware of this linkage - but echo chambers are unbelievably powerful and convincing.

None of this is to say that paedophilia isn’t a problem, or that is not utterly abhorrent. I’m not clear on the stats, but even one case would be too many. Of course, it’s now much harder to find reliable stats because the topic has become a political football. As usual, the Reactionaries have succeeded in making something awful even worse by using it as a weapon for their political battles.

Suffice it to say that paedophilia is never going to be legal in any liberal (or even illiberal) democracy on earth. It’s a taboo for a reason. And those Reactionaries currently frothing at the mouth about the subject would do well to read up on the child marriage laws in 44 “conservative” US states that codify the marriage of 16-year-old girls to men four or five times their age. Even better, these girls cannot sue for divorce because they are minors. But sure, guys, you’re the protectors of the children.

And, of course, Progressives are playing right into the hands of these provocations, attacking Reactionaries online and issuing death threats etc. The Reactionaries have a built-in retort - “So, you’re in favour of paedophilia then?”. And on and on the culture war grinds.

Progressives appear to be unable to see that reports from conservative parents that they were intentionally not informed about syllabus changes (i.e. the inclusion of gender identity) are a problem. If you suggest that perhaps a 6-year-old doesn’t need to learn about a complex subject like gender identity just yet, or that parents may prefer to handle that subject, you are shouted down as a bigot-adjacent enabler. More on that subject tomorrow.